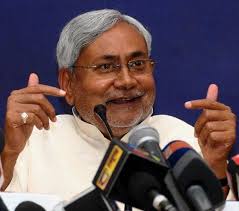 PATNA : Nitish Kumar, clearly rattled by the newest alliance in Bihar, today hit out at Lok Janshakti Party leader Ram Vilas Paswan for reviving his ties with the BJP-led NDA. “Now that he has taken a U-turn, it shows he never had any principles. He worked according to what he thought was a better deal. That is why I said that it is surprising, but true,” the Bihar Chief Minister told reporters in Patna today.
He was referring to Mr Paswan’s decision to strike an electoral alliance with the BJP despite Narendra Modi being its prime ministerial candidate. Mr Paswan had quit the BJP-led coalition government in 2002 over Mr Modi’s handling of communal violence in his Gujarat.”There cannot be another such incident within the nation. And no one else can match this,” Mr Kumar said.
The Bihar chief minister has reason to worry about the impact that the Paswan-BJP reunion could have on the state’s electorate in the Lok Sabha polls, due by May. The BJP, which enjoys the backing of the upper castes and the Baniyas, or the traders’ community, can now bank on the support of the Paswans and the Kushwahas, both powerful backward castes that constitute about 5% each in the state.
The BJP’s prospects are also expected to improve after influential caste leaders such as former union minister Jai Narain Prasad Nishad, who was expelled from Mr Kumar’s Janata Dal United yesterday, join the party. Mr Nishad, 84, is a powerful voice of the “mallah” (fishermen) community, an extremely backward caste that has pockets of influence in north Bihar.