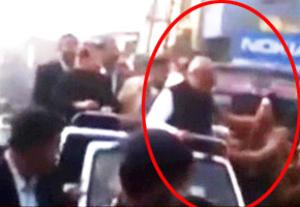 PANIPAT : Haryana Chief Minister Bhupinder Singh Hooda was slapped by a young man at a road show in Panipat today. Mr Hooda was travelling in an open jeep when a man in a brown jacket lunged towards him and slapped him.
The attacker, a young man named Kamal Mukhija, was immediately grabbed by the security personnel and has been taken into custody.
Kamal, according to reports, is unemployed and attacked the Haryana Chief Minister to express his anger over not been able to get a job in the state.