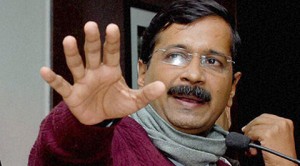 ISLAMABAD :Delhi Chief Minister Arvind Kejriwal has received a mixed reaction from the Pakistani media after his interaction with journalists from the country, with one daily today calling him the “most unimpressive” Indian politician while another praised him for his simplicity.
Tearing into Mr Kejriwal, The News daily reported: “India’s new shooting star with dreams of another ‘India Shining’ appeared as the country’s most unimpressive politicians but with a most impressive agenda.” It said the Aam Admi Party leader, who was wearing his “Kejriwal muffler”, was armed with a “mission of populist politics”.
Mr Kejriwal met a visiting Pakistani media delegation in New Delhi on Friday. Asked about bilateral relations, he said: “I have never visited Pakistan before. I have not studied India’s relations with Pakistan.”But I want India to have peaceful relations with all the countries of the world.”
Pressed to say something more insightful on India-Pakistan relations, he was quoted by Dawn as saying: “To be honest, it is really outside my remit. You should ask the central government.”
The News, which was unusually critical of Mr Kejriwal, reported: “That he was totally unprepared to meet with foreign journalists is an understatement and one wondered whether he still remembered where Pakistan was on the map from his days of studies to qualify as a civil servant.”
Responding to a question about the Congress’ support for him, Mr Kejriwal said, “They did so to trap us and now they themselves are trapped.”He said AAP targeted “corrupt politicians” to highlight corruption, criminalisation, commercialisation and dynastic politics.
The Dawn reported that when the Pakistani journalists congratulated him on AAP’s success, Mr Kejriwal responded: “Sab Allah ka shukar hai. Hum to bahut chhotay log hain. (All the success is due to Allah’s blessings. We are very small people.)”