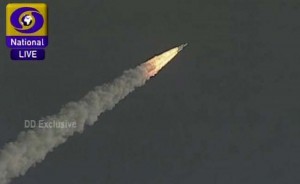 Prime Minister Narendra Modi tweeted, “Successful launch of GSLV Mk-III is yet another triumph of brilliance & hard work of our scientists. Congrats to them for the efforts.” After its blast-off from Sriharikota in Andhra Pradesh, the 42.4 m expendable rocket ascended to the sky with a one-way ticket as its design life span is just around five minutes.
)The Rs. 160 crore mission tests the rocket’s atmospheric flight stability powered by two engines with around four-tonne luggage.The GSLV Mk III is a new rocket design and also marks the beginning of what could be India’s initiation into the ambitious human space flight programme.
Its main passenger is an Indian-made 3.7 tonne crew module capable of taking two or three astronauts to space.Just over five minutes into the flight, the rocket ejected the giant cupcake shaped crew module at an altitude of 126 km.The unmanned crew module was navigated by remote-control and made to re-enter the atmosphere at a massive velocity.
It was slowed down with massive parachutes, the largest ever to be used by India, before it splashed down in the Bay of Bengal.For the country, ISRO perfecting the cryogenic engine technology is crucial as India can save precious foreign exchange by launching heavy duty communication satellites by itself
.On this flight, the rocket is being tested on how it performs while traveling in the atmosphere. Its first two stages are active rocket engines and the third stage, which consists of the cryogenic engine, is passive.ISRO has said it can fly astronauts to space using a made-in-India rocket within seven to eight years of getting the government’s clearance for its astronaut programme.The space agency has sought around Rs. 12,500 cr for its human space flight mission.
When it happens, India will become the fourth country in the world to have the technology of sending humans into space, after the US, Russia and China.