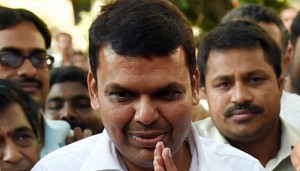 MUMBAI: The path has been cleared for Bharatiya Janata Party’s state unit chief, Devendra Fadnavis, to be anointed Maharashtra’s chief minister, it seems.Fadnavis on Thursday met Union Minister Nitin Gadkari, whose name had been floated by several BJP MLAs for the top state job.
After the meeting, Gadkari once again reiterated that he was happy in Delhi and that he was not returning to state politics.The remarks appeared to seal the top job for Fadnavis, who was among the frontrunners to become the CM.
His candidature had been put in doubt earlier this week after a group of BJP legislators demanded that Gadkari be made CM and the minister himself made ambiguous remarks, saying he would go by the party’s decision.
However, he later clarified that he was not keen on returning to Maharashtra politics.
The BJP emerged as the single largest party in the just concluded Maharashtra elections, but has not been able to form the government as it failed to win majority.
The party is in talks with Shiv Sena to form a coalition government but the process is taking time given the pre-poll acrimony.
It may be recalled that the two parties had parted ways ahead of the elections due to differences over seat-sharing.In the elections, the BJP won 122 seats while Shiv Sena managed to take 63.The present talks are focusing on representation in the next government to be formed, including the deputy chief minister’s post.
It is believed that the deal may be finalised over the weekend as Prime Minister Narendra Modi meets Shiv Sena MPs, including other NDA allies, over dinner on Sunday.
Speculation is also doing the round that Shiv Sena chief Uddhav Thackeray may meet Modi tomorrow in Mumbai, where the PM will inaugurate a private hospital.