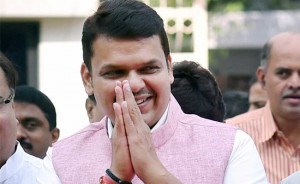 MUMBAI: Maharashtra Chief Minister Devendra Fadnavis’s minority government on Wednesday won the vote of confidence of the state Assembly by a voice vote, while the Shiv Sena opted for the role of opposition here.The development was preceded by the unanimous election of BJP leader Haribhau Bagde as the new Speaker of the Maharashtra Assembly.
In rare consonance, the two parties have demanded a fresh trust vote. They contend that the BJP did not have the numbers to prove its majority on the floor of the house through a division vote and have said they will approach the governor. “It a black day for democracy…There should be another confidence vote, the BJP government should prove their majority,” said the Congress’ Prithiviraj Chavan, calling it an “illegitimate government” and accusing it of “running away.
The Congress and Shiv Sena cried foul over the newly-elected speaker’s decision to reject the demand for balloting in the trust vote and instead to settle for a voice vote.State Congress president Manikrao Thakre alleged that the government has failed to prove its majority as per Governor CV Rao’s directives.”This is a murder of democracy and the entire state has witnessed it. This government continues to be in minority and must resign immediately,” Thakre demanded.
Shiv Sena’s Ramdas Kadam and other leaders also demanded a count of the voice votes to ascertain how many were in favour of the BJP government.Thakre said a delegation of all parties would meet the governor to apprise him of the developments.”We will urge the governor to either order a fresh of vote of confidence since today’s vote was not done properly. The AB Vajpayee government in the past at the Centre had fallen because of just one vote. Here, this government fell short of at least 25 votes and has no right to continue. We will not allow the government to work,” he declared.
Congress Legislature Party leader Radhakrishna Vikhe-Patil said the ruling party violated rules and must seek a fresh vote of confidence of the house.The Congress and the Shiv Sena – which will now be the main opposition party in Maharashtra with its Eknath Shinde elected Leader of Opposition – have protested against the Speaker, Haribhau Bagde’s decision not to hold a division vote, in which legislators press buttons on a voting machine to record their votes, which are then counted.