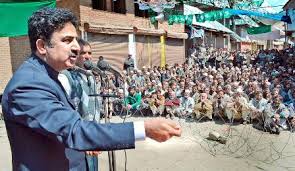 SRINAGAR: In an apparent reference to the Bharatiya Janata Party (BJP) which is trying to make inroads in the Jammu and Kashmir, People’s Democratic Party (PDP) leader Peer Mansoor has urged the people not to vote for parties, which would impose a Hindu chief minister if elected to power.
Addressing a rally in south Kashmir, PDP MLA Mansoor said that certain parties are trying to forge an alliance with some communal elements and want to impose a Hindu CM in J&K.He urged the people not to vote for parties which would impose a Hindu CM as it would be a curse on Kashmir.
Mansoor also reportedly said that Kashmir has a Muslim majority and only a person from the same community can rule the state.Mansoor’s controversial statement has drawn a sharp reaction from the BJP, which said that it would file a complaint with the State Election Commission in this regard.The BJP has also demanded strict action against Mansoor for playing communal card ahead of assembly elections, and said such remarks are not good for the nation’s integrity.
Interestingly, PDP chief Mehbooba Mufti had recently said, “The electoral contest is now mainly between PDP and BJP; casting votes for NC or Congress would be a sheer wastage of your power to change.”Jammu and Kashmir Assembly has 87 seats and will witness five phase elections starting from November 25.Polling in the hilly state will take place on November 25 for phase 1, December 2 for phase 2, December 9 for phase 3, December 14 for phase 4 and December 20 for phase 5.Counting of votes for all the five phases will be held on December 23.