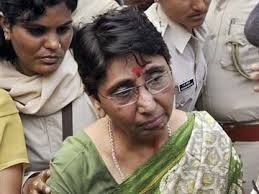 AHMEDABAD: Former Gujarat minister Maya Kodnani, who was sentenced to 28 years in jail for murder during the 2002 riots, has been granted bail on health grounds.She was granted bail for three months in November and allowed to leave a prison in Ahmedabad.
Her condition deteriorated and she was hospitalized in February. The Gujarat High Court rejected her plea for a six-month extension of bail, but the Supreme Court gave her some relief by giving her a week’s bail.Ms Kodnani, 58, a state legislator from the BJP, was convicted in August 2012 for the Naroda Patiya massacre, among the bloodiest episodes of the three-day riots in which over 1,000 people were killed, most of them Muslims.
In 2007, Ms Kodnani was appointed minister for women and child development in the state government, then led by Narendra Modi as Chief Minister. She was the highest-profile figure to be convicted in connection with the riots. She resigned after she was arrested in March 2009.Witnesses told investigators that Ms Kodnani, a gynaecologist, played a leading role in the massacre of 95 people – 30 men, 32 women and 33 children – in Naroda Patiya.