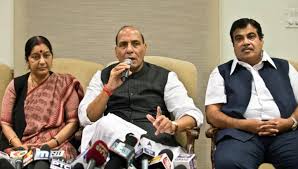 NEW DELHI : After reports that listening devices were found in union minister Nitin Gadkari’s home, sources  told  that the homes of External Affairs Minister Sushma Swaraj and Home Minister Rajnath Singh may also have been bugged.

The ruling BJP has officially denied it. “Over the last year, it was widely believed the BJP would come to power. So one might not be surprised if there was an interest in information gathering…but in terms of putting listening devices and eavesdropping systematically, that isn’t right,” party spokesperson Nalin Kohli told, also citing Mr Gadkari’s emphatic denial.
A report in The Sunday Guardian – founded by senior journalist MJ Akbar who joined the BJP earlier this year – said “high power listening devices” were found in Mr Gadkari’s bedroom at his 13 Teen Murti Lane residence in Delhi recently.The report referenced the diplomatic row between India and the US this month after documents leaked by former security contractor Edward Snowden revealed that the National Security Agency or NSA was authorised to spy on the BJP in 2010.
Mr Kohli said, “If there is need, we will take it up with the US.”

The controversy triggered by The Sunday Guardian that highly sophisticated listening devices were planted at the residence of Union Minister Nitin Gadkari could not be contained by an explanation from the Minister that stopped short of a complete denial. After the Minister described the report as “highly speculative,” the Congress said the government must explain the issue in parliament and suggested that there was a trust deficit among ministerial colleagues.

“If ministers’ houses are bugged, then it is not a good omen. It should be investigated. How can it happen? It should be explained by the government in the House,” former Prime Minister Manmohan Singh told journalists at an Iftar reception hosted by Congress president Sonia Gandhi.

BJP leaders only saying it is for the government to confirm or deny the report, but pointed out that according to documents released by the U.S. whistleblower Edward Snowden, a U.S. court had in 2010 authorised the country’s spy agencies to snoop on the BJP. “We must wait for the government’s response on whether the report is true or not. As of now, it is speculation,” said Sidharth Nath Singh, BJP spokesperson.

Another BJP leader Subramanian Swamy had said yesterday, “My view is that the senior leadership of the BJP was definitely targeted by the NSA, and NSA can also include temporarily people from the CIA and therefore we need to know the truth.” He alleged that the UPA government helped in the “spying”.Trying to rein in a spiraling controversy, Rajnath Singh on Monday ruled out any investigation, saying,
“There is no contradiction. Mr Gadkari himself has denied it.”
But the Congress is insisting on an investigation. One leader even alluded to Prime Minister Narendra Modi and alleged snooping scandals in Gujarat, the state he ruled for 13 years till he took charge at the Centre. “I come from Gujarat and it is commonplace to snoop there. It looks like the sutradhar(common link) has come to Delhi,” said Shaktisinh Gohil, a Congress spokesperson.
He stopped short of accusing Mr Modi, saying, “Let the Prime Minister explain this. Earlier when Manmohan Singh was PM, he would often question his silence. Why is he silent now?”