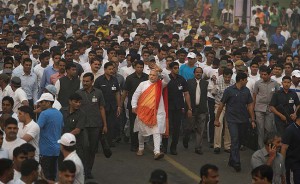 NEW DELHI : Prime Minister Narendra Modi was at the centre of a massive commemoration today of the birth anniversary of Sardar Vallabhbhai Patel, India’s first Home Minister, who belonged, like Mr Modi, to Gujarat.   “Without Sardar Patel, even Mahatma Gandhi seems incomplete. It was a unique partnership that strengthened the struggle for independence,” the Prime Minister said after he placed flowers on a statue of Sardar Vallabhbhai Patel in Delhi near parliament.
Dressed in a white kurta pyjama with a red shawl, Mr Modi then walked briskly down one of Delhi’s main roads, flagging off a countrywide “Run for Unity” with thousands of participants by his side.Since taking office, Mr Modi’s government has said Sardar Vallabhbhai Patel’s birth anniversary will be celebrated ever year as Rashtriya Ekta Diwas or “National Unity Day.”
Today is also the 30th death anniversary of former Prime Minister Indira Gandhi, whose assassination by her Sikh bodyguards in 1984 triggered riots in which thousands of Sikhs were killed in the capital.  In his speech, Mr Modi referred to Mrs Gandhi’s death anniversary; later, he described the communal violence that followed her death as “a dagger into the heart of thousands of years of country’s heritage and culture.”  Some senior Congress leaders have been accused of instigating the mobs that led the riots, and the party has been criticised for not penalising them.
The PM and his party, the BJP, have accused the Congress of ignoring the legacy of Sardar Patel as a founding father of the country and promoting only the Nehru-Gandhi dynasty. Stung, the Congress has said that the PM should remember and acknowledge that Sadar Vallabhbhai Patel was a Congressman.Mr Modi’s government has said it will provide $33 million or Rs. 3000 crore towards the construction of a massive statute in Gujarat of Sardar Patel, intended to be twice as tall as that of the Statue of Liberty.