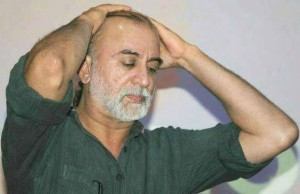 MUMBAI : Tehelka’s Tarun Tejpal plans to file a complaint with the cyber cell of the Delhi Police after the young journalist who had accused him of sexually assaulting her, alleged that an email and a photograph are being used to slander her.
The young woman has filed a police complaint in Goa. In the photograph, she is seen with Mr Tejpal and Robert DeNiro, who was the chief guest of the THINK festival organized in a Goa luxury hotel last year. The email claims the photo was taken a day after the alleged assault.
Goa police sources have said they are trying to trace the source of the email.
Those close to Mr Tejpal allege that this is a conspiracy to hinder his chances at getting bail and, sources said, the senior journalist is open to an investigation to determine if the email was leaked from a server of Tehelka, the magazine he founded and edited till he resigned in November last.
Mr Tejpal was arrested on November 30 after his young woman colleague accused him of sexually assaulting her in an elevator twice, once after they escorted Robert DeNiro to his room.
The woman has alleged that the mail and photograph have surfaced as an attempt to counter her version of the alleged incident, to “slander her and violate her privacy.”
Mr Tejpal, who has been in jail for nearly two months, has also been accused of “threatening” the investigating officer handling the case, Sunita Sawant.
Ms Sawant has filed a complaint alleging that Mr Tejpal threatened and intimidated her during the investigation.
Mr Tejpal has rebutted the charge and alleges that it was an attempt to have his bail denied earlier this month. However, the judge’s order clearly says the allegation was neither mentioned by the police nor considered.
The former Tehelka editor had also written a letter to Ms Sawant, in which he said, “I am shocked and distressed by the observation that suggests you have complained of being intimidated and harassed by me. This is so far from the truth as to be outrageous.”