HYDERABAD : The Andhra Pradesh assembly today emphatically rejected the draft Bill to create Telangana, embarrassing the Centre and posing a moral dilemma for President Pranab Mukherjee, who has to forward the bill for passing in Parliament. A majority of MLAs backed Chief Minister Kiran Kumar Reddy’s resolution to reject the bill that creates the 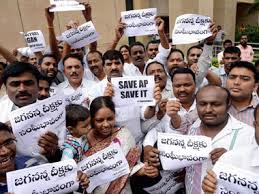 new state.
Here are the latest updates on this story:In a largely symbolic exercise, the state assembly passed a resolution rejecting the Telangana bill, saying it seeks to divide the state without any sound reason or consensus and “ignores the very basis of creating Andhra Pradesh, the first linguistic state of independent India.
” Though the assembly’s vote does not matter, the rejection poses an ethical question for the Centre and the President.It is now the President’s prerogative to clear the bill for discussion and vote in Parliament in the session that starts on February 5. Sources say he is likely to consult legal experts on his next step.The Congress will also find it hard to muster support among other parties to push the bill through. Sources say the government has begun discussions with BJP to ensure bipartisan support for the bill that proposes to divide Andhra Pradesh and turn the 10 districts of Telangana into India’s 29th state.Pro-Telangana leaders said the resolution was expected, and “not even worth the paper it was printed on.
” KTR Rao, leader of the Telangana Rashtra Samiti, said “The role of the assembly in creating a new state, especially in a state this divided, is limited. The president should now take the next step in this process.”Chief Minister Kiran Kumar Reddy had dared his own party and said he will quit politics if the bill is introduced in its current form in Parliament.This is the last time that Parliament will meet before the national elections, so if the Telangana proposal is not cleared, Andhra Pradesh will be undivided for the national polls.
That will rescue politicians like the Chief Minister who belong to the non-Telangana regions of Rayalaseema and Coastal Andhra, which will form the residuary state.Residents of “Seemandhra” as the two regions are together referred to, are worried about receiving less water and power than they have so far. Telangana has been arguing for decades that its resources are unfairly exploited by Seemandhra.The president’s extended deadline for the assembly to return the bill ends today. 57 legislators, including the Chief Minister, had asked for three more weeks for a detailed discussion.