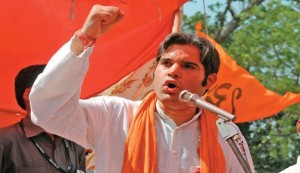 LUCKNOW: BJP general secretary Varun Gandhi has ruled out campaigning against his estranged cousin and Congress vice president Rahul Gandhi in Uttar Pradesh’s Amethi constituency. The 34-year-old leader, likely to contest on a Bharatiya Janata Party (BJP) ticket from Sultanpur, told media late Thursday that he believed in political decorum and never harboured any ill will against his opponents.
“I have a positive mindset towards politics and have always believed in certain lines of decency that I would never cross,” he said, adding he will not campaign against Rahul Gandhi in the neighbouring Amethi constituency, where the latter was seeking a re-election.
Varun Gandhi, a sitting MP from Pilibhit, has shifted base to Sultanpur.
Varun Gandhi’s mother Maneka Gandhi, currently a BJP parliamentarian from Aonla in Uttar Pradesh, is likely to contest from Pilibhit in the Lok Sabha 2014 election, a seat she has held in the past.