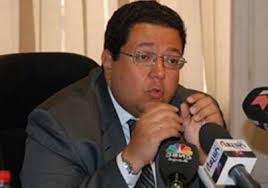 CAIRO: Ziad Bahaa-Eddin, Egypt’s second deputy prime minister and minister of international cooperation, tendered his resignation to Prime Minister Hazem el-Beblawi Monday, official news agency MENA reported The resignation hasn’t been accepted yet, MENA quoted cabinet spokesman Hany Salaheddin as saying.
In a statement posted on his Facebook page, Bahaa-Eddin said he submitted his resignation so he can resume his political, party and legal activity outside the government. ”After reification of the constitution by an overwhelming majority, a step that establishes new legitimacy, a basic stage in the future road map has been finalised,” he said

Meanwhile, the report denied news circulating about an imminent cabinet reshuffle. Bahaa-Eddin, who tendered his resignation three times before, has been critical over the prime minister’s decisions, particularly the controversial protest law.
“My role will be more beneficial in political work as the country is preparing for upcoming presidential and parliamentary elections,” he said.