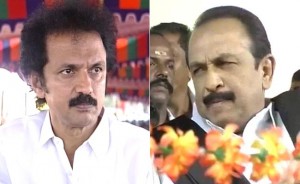 CHENNAI: Steamrolled by J Jayalalithaa in multiple elections in the last few years, arch rival the DMK has spotted an opportunity for political re-alignment in Tamil Nadu after the AIADMK leader’s conviction in a corruption case, which debars her from contesting the state elections in 2016.
It is trying to cobble together a mega alliance by wooing back former allies, the PMK and the MDMK, who are currently part of the BJP-led National Democratic Alliance or NDA.
The wedding reception of PMK leader Anbumani Ramadoss in Chennai on Tuesday evening provided the perfect setting. DMK leader MK Stalin was seen greeting MDMK chief Vaiko, who was once seen as his political rival in the DMK.
DMK chief M Karunanidhi later said, “Vaiko is not my enemy, he’s my friend. I’d be happy if a new alliance emerges.”
Vaiko, less effusive, said about his meeting with Mr Stalin, “It’s a good political culture. We both met and enquired about each other’s families and Mr Karunanidhi.”The DMK’s ambitious plan for 2016 reportedly also includes trying to rope in actor Vijayakanth’s DMDK and mending fences with the Congress.
But getting together such an alliance against the AIADMK will be a challenge. The PMK and DMDK have said they want to position themselves as an alternative to both the AIADMK and the DMK, which have taken turns at ruling the state for years.
The AIADMK says it is unruffled by the political activity. “Things will change course if our Amma Jayalalithaa gets relief in the Karnataka High Court. Anyway, the conviction would only give the party the advantage of sympathy,” a senior leader said.
Ms Jayalalithaa won a big mandate to rule Tamil Nadu in 2012 and was chief minister till last month, when she had to step down after being convicted by a Bangalore court. She cannot contest the next elections unless her conviction is revoked; she has challenged it in the Karnataka High Court.
By-elections for her seat, Srirangam, will test how well the DMK can mobilise other parties into a united opposition against the AIADMK. In the national elections this year, the AIADMK flattened all other parties, winning 36 of the 39 Lok Sabha seats. The DMK won none, the PMK one.