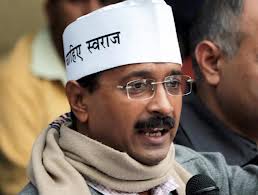 NEW DELHI : Batting for Law Minister Somnath Bharti after his altercation with cops, Chief Minister Arvind Kejriwal on Saturday accused the Delhi Police of “hiding its failures” and not acting on complaints of residents of Khirki village, Extension and Hauz Rani since November last year.
“The police brass is now busy hiding its failures of not having acted on the complaints of local residents of Khirki village, Extension and Hauz Rani since November 2013 about certain undesirable activities in these areas,” the Chief Minister said in a statement.
He also charged a section of the media with putting out “misleading” reports that local residents and AAP activists had resorted to “objectionable behaviour” with foreign nationals in Bharti’s presence.
“The newly-elected government of Delhi strongly condemns the motivated attempts being made to twist a law and order problem into an unfounded issue based on colour and race,” he said in the statement.  ”Government is strongly opposed to any harassment on the basis of nationality, caste, creed, religion and gender,” he said.
Kejriwal has demanded action against the policemen — SHO of Malviya Nagar and two ACPs — who refused to cooperate with Bharti in cracking down on an alleged prostitution ring in South Delhi three days ago.
“Despite repeated requests by Law Minister Somnath Bharti to the police officers present on the spot to call a squad or at least some women personnel, no attempt was made by the police to do so,” he said.
Attacking Delhi police further, he said, “The SHO of Malviya Nagar Police Station was allegedly involved in beating a Dalit women in May 2013 and the complaint of this incident by the residents of the area is pending with the Union Home Ministry since eight months.”
The AAP government has alleged that Malviya Nagar police did not cooperate with Bharti in conducting a raid on Nigerian nationals whom he claimed were involved in a drugs and sex racket at Khirki village.
It also sought action against a policeman who had tiff with Women and Child Development Minister Rakhi Birla in Sagarpur of West Delhi.
The Chief Minister has criticised police for their handling of the Danish tourist gangrape case.
Kejriwal had yesterday said he and his Cabinet colleagues will hold a dharna on Monday outside the Union Home Minister’s office at North Block, if the three SHOs and two ACPs are not placed under suspension by then.
He had also written to Shinde, demanded handing over of control over Delhi Police to Delhi Government without any “further delay”.