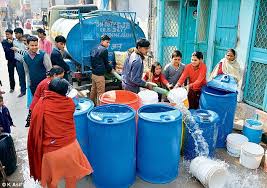 NEW DELHI : Delhi Jal Board on Saturday  suspended 14 engineers against whom CBI had registered cases of alleged cheating and forgery in supply of sewerage equipment.
Top sources said the suspensions were made following instructions by Delhi Chief Minister Arvind Kejriwal, who is also the chairperson of DJB.
Earlier this week, CBI has registered five cases of alleged cheating and forgery in the supply of sewerage equipment to DJB in which the eight executive engineers and six junior engineers were named along with a private company
According to CBI, the case relates to the “supply of allegedly spurious, cheap items of motor pumps, gear boxes and machinery, spare parts used in sewage treatment plants at exorbitant rates by showing the firm as authorised dealer of a manufacturing firm on the basis of fake and forged documents”.
The executive engineers of DJB allegedly entered in criminal conspiracy with owner of Kirti Nagar-based Metro Projects and Sales Services, Raman Gupta during 2009-12 who forged letters of regional manager of Mumbai-based company Esenpro declaring his company to be authorised supplier of Esenpro equipment in Delhi, the sources said.
CBI has recovered over 100 such letters with varying signatures during its searches carried out at 21 locations in Delhi, Noida and Ghaziabad, agency sources had said.
Based on these letters, Gupta allegedly supplied equipment carrying Esenpro trademark, purportedly spurious, worth Rs six crore to five sub divisions of Jal Board– Kondli, Keshopur Coronation Park, Maharani Bagh and Wazirabad, they said.