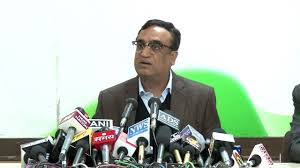 NEW DELHI : The Congress has launched a scathing attack on Narendra Modi-led NDA government over its track record and alleged that the government has made 25 U-turns over policy matters and poll promises.
Addressing a press conference, Monday, party spokesperson Ajay Maken said, “The BJP had shown big dreams to the people but is now taking U-turns.”Releasing a booklet on the alleged U-turns by the government, Maken said the Congress does not support the policies of the NDA government and the aim of releasing the booklet is to make the people of the country aware of the U-turns.
Maken said the booklet mentions 22 U-turns, adding that the NDA government has gone back on three more issues after it was sent for printing on Friday.“The government made tall promises to the people but then did not deliver on them,” Maken said.
Among the issues raised in the booklet is the government’s stand on black money. Maken alleged that the BJP had gone back on its promise to bring back black money in 100 days.The Congress spokesperson added that Modi, during poll campaign, had said that the return of black money would bring a windfall of Rs 15-20 lakhs to each citizen of the country. “We want to ask Modiji, where is the money?”
“The truth is that not even one paisa has come back nor one name (of black money holder) has been revealed,” he said.
Among the other issues raised by the Congress were government’s stand on civil nuclear liability bill and land swap with Bangladesh.Maken also targeted the government over its external affairs policy concerning Pakistan and China.