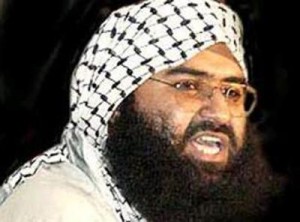 NEW DELHI: Insisting that designation of any individual as terrorist by UN is a “serious issue”, a senior Chinese official today said there was a need for more evidence from India for better understanding to ban JeM chief and Pathankot strike mastermind Masood Azhar by the global body.

Liu Jinsong, Deputy Chief of Mission and Minister at the Chinese Embassy, justified China’s action on India’s bid against the Pakistan-based terrorist and said his country can’t be the judge to decide who is right and who is wrong on the issue.

“At the UN, this is a very serious issue. We need to discuss (on the issue), we need some kind of understanding from the related countries, concerned countries.

“Pakistan is not your enemy right? It’s your brothers, it’s your neighbour. It is a nation (born) from one nation. You were one family before. You can’t move neighbours. And you can have a new boyfriend or a girlfriend tomorrow, but you can’t have your neighbours changed,” Mr Liu said when asked about the Chinese action.
Last week, China stopped UN sanctions committee from designating Azhar as terrorist, maintaining that the case “did not meet the requirements” of the Security Council. This is not the first time China has blocked India’s bid to get Pakistan-based terrorist groups and leaders proscribed by the UN.
“Pakistan says India’s position is not good for them, it is against Pakistan. But India says its position is in its national interest. China can’t be the judge (to decide) who is right, who is wrong. With Pakistan, we are good friends. With India, we are also good friends,” said Mr Liu.
The Chinese official further said “We can’t be on any side. We can’t stick to one side. We can’t veto, we can’t (remain) absent. Only thing we can do is (to put it on a) technical hold.”

Referring to Prime Minister Narendra Modi’s recent comment that there cannot be any distinction between good and bad terrorists, he said China endorses the view and complimented him for trying to improve ties with Pakistan.
“Our view is Prime Minister Modi’s view… There is no good or bad terrorists. So there should not be any kind of double standard.
“At the UN this is a very serious issue. We need to discuss, we need some kind of understanding from the related countries, concerned countries,” the official said, adding “we are very pleased to say that Prime Minister Modi tried to do his best to improve relations with Pakistan. We like our two neighbours– India and Pakistan.”
Mr Liu said India and Pakistan must engage in talks.”We always tell our Indian friends (that) if you mention something related to Pakistan then why don’t you have some bilateral talks. You can have some agreement, you can have some close door argument,” he said.