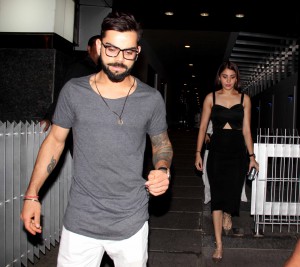 MUMBAI: Actress Anushka Sharma and cricketer Virat Kohli were spotted at a suburban restaurant in Mumbai on April 6, suggesting that they may have reunited after allegedly breaking up some months ago.
In the picture, Virat, 27, and Anushka, 27, looking lovely in a black dress, were spotted leaving the restaurant. Later, Anushka was spotted in her car and Virat left separately.

Anushka and Virat were reported to have broken up in February. On Instagram, Virat reposted a photo of himself, which he had deleted some days ago. The first time round, it was captioned ‘Heartbroken.’
Virat had unfollowed Anushka on both Instagram and Twitter, a fact that did not escape notice by fan clubs and the tabloid press. Anushka is still following him on Twitter.

Anushka and Virat had allegedly split because of their busy schedules that both of them are committed to – Anushka, for instance, is shooting not just Salman Khan’s Sultan but also Ae Dil Hai Mushkil with Ranbir Kapoor and Aishwarya Rai Bachchan. The couple reportedly rented a flat in the Mumbai neighbourhood of Versova last year.
Anushka and Virat have reportedly been dating since 2013, when they met while filming a commercial. Anushka later told the press, “We are two normal young people in a relationship.”