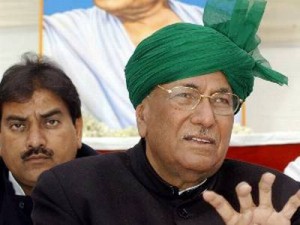 CHANDIGRAH: INLD chief Om Prakash Chautala today attacked the ruling Congress in Haryana for taking the state “backward” and said he was not power hungry but wanted to fulfil the dreams of Devi Lal, who had “sacrificed” prime minister’s post for VP Singh.
INLD is out of power in Haryana for a decade now.The 79-year-old leader, who is out on bail on health grounds, addressed several rallies in the state today.
“I want to make one thing clear that we (INLD) are not power hungry. We do not want to grab power. Our mission is to fulfil the dreams and vision of Devi Lal. We are also seeking votes for the performance of our government when we were in power,” Chautala said in Hodal.He said that Devi Lal, who served as country’s Deputy Prime Minister also, had “sacrificed the post of PM for the sake of (former PM) V P Singh. History shows that all the greats– be it Lord Ram, Krishna, Mahaveera, Buddha…all of them made sacrifices.
“History has shown that whoever makes sacrifice, his name is written in golden letters and long after he is gone he continues to earn love and respect of the people”.
“Devi Lal was one such person who did not think twice and handed over the reins to V P Singh (1989),” Chautala said.
“People still love and support us because we have done good work in the past. We will do even better in the future. We seek your support,” he said, even as the INLD chief hit out at the Congress for “taking the state backward”.He also took a dig at the BJP, saying the party was dreaming of forming its own government.
Chautala also said that his party candidates may not have “money power” to woo the voters, but they will put in sincere efforts to take the state on the path of progress if voted to power.