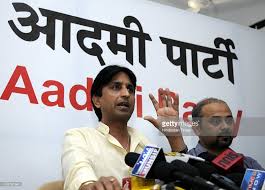 Addressing a press conference at the Constitution Club here, AAP leader Kumar Vishwas alleged the Central Bureau of Investigation (CBI) raided Delhi Chief Minister Arvind Kejriwal’s office on Tuesday to see the file related to the government’s decision to set up a commission to investigate the DDCA financial misappropriation scam.
“Whenever anyone has tried to expose the DDCA scam, the Centre has opposed it,” Vishwas alleged.“AAP wants to tell today that the raid at CM’s office was an attempt to cover corrupt activities done in the DDCA during FM Jaitley’s tenure as president,” he added
The party accused Jaitley and other office bearers of DDCA of siphoning funds amounting to several crores.
“Arun Jaitley has used DDCA for his benefit, he has tried to hide the corruption,” the AAP leader alleged, saying “it is impossible that the DDCA scam can be probed if Jaitley continues as FM”.“The DDCA scam happened with complete knowledge and support of Mr Jaitley,” Vishwas said.
AAP’s Raghav Chadha said Rs 57 crores were siphoned off in the reconstruction of the Feroz Shah Kotla​ cricket stadium when Jaitley was the DDCA president.
“The DDCA had planned to reconstruct the stadium at a cost of Rs 24 crore. In total, Rs 114 crore were spent. Engineering Projects India Ltd (EPIL), a PSU, which constructed the stadium, were paid only Rs 57 crore. Where did the remaining Rs 57 crore go?” Chadha asked.
“Further, a loan of Rs 1 crore 55 lakh was granted to three companies by DDCA. The reason behind this grant was not given. Later, a DDCA fact-finding committee said that prima facie, it was a case of theft and criminal breach of trust,” he stated.

The AAP alleged that shell companies were floated by DDCA office bearers to siphon off money.“Five companies were paid lakhs of rupees. Their registered office, e-mail, directors, shareholders are all same,” Chadha said.
“Money was also paid to two other firms for work already done by another company,” he added.The AAP further alleged that money has been siphoned off from DDCA in the form of proxy litigation and proxy billing.
The party also demanded to know what has been the relationship between Jaitley and Narendra Batra, who has been DDCA treasurer for many years.The AAP also alleged scam in selection of selectors and players, saying common man’s children could never get entry in the Delhi team.“Arun Jaitley was running the DDCA as an ‘elite club’,” Chadha said.
“Unauthorised construction has been done without MCD approval. Tendering process was also not followed. Arun Jaitley has been running the DDCA like an ‘elite club’,” the AAP said further.

The party also alleged an age certificate scam in the DDCA as part of which players with higher age were playing in teams meant for younger cricketers.It also accused the DDCA of not paying entertainment tax to the Delhi government.