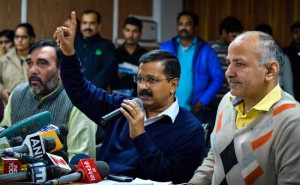 NEW DELHI: Delhi Chief Minister Arvind Kejriwal today said the BJP was “defending corruption” and “running away from investigation” after the party demanded an apology from him over an inquiry report into the alleged corruption in the Delhi cricket body.
The party’s demand came after the report by the government-appointed commission did not name Union Minister Arun Jaitley — who headed the cricket body for 13 years – despite Mr Kejriwal’s pointed allegations.
“Why is Jaitley ji afraid of facing enquiry? That’s the difference between BJP and AAP. AAP takes strong and swift action on credible evidence. BJP defends corruption and runs away from investigation,” the Chief Minister said in a series of tweets.
Mr Kejriwal’s Aam Aadmi Party contends that this report is not final, and there’s more to come, and the report, which the BJP is citing, says there should be a commission of inquiry into the matter.

Stepping up the attack, AAP leader Ashutosh said the BJP, which had earlier rubbished the commission, was now considering it a “sacred book”.”Even PM Modi has said you should follow (LK) Advani and resign till he comes clean,” he said.
AAP has also accused the BJP government of stalling the commission’s progress through Lieutenant Governor Najeeb Jung. The BJP has questioned Mr Kejriwal’s naming of a one-man commission to inquire into the alleged corruption on grounds of jurisdiction.
“A whistleblower had alerted the Delhi government that the formation of the commission will be scuttled through Lt Governor,” Ashutosh said.Mr Jaitley, who has rubbished AAP’s allegations, has already filed a defamation case against Mr Kejriwal and Ashutosh. The minister, who headed the DDCA for 13 years till 2013, has said Mr Kejriwal’s allegations were meant to to deflect attention from a CBI raid on his principal secretary Rajender Kumar.
Earlier today, the BJP demanded a “public apology” from Mr Kejriwal. “The truth is out. The report does not name Jaitley. There is no allegation against him, there is no indication (of wrongdoing),” said BJP spokesperson MJ Akbar.