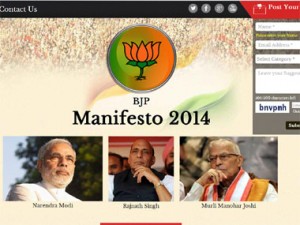 NEW DELHI : Narendra Modi  the frontrunner for the prime minister’s post, today promised good governance and inclusive development as his BJP released its much-delayed manifesto with a mention of its core agenda including a Hindu temple at a disputed mosque site in Uttar Pradesh.”This manifesto is not just a formality but our goal. Good governance and development are our key agenda,” said Mr Modi. “I will do nothing for myself. I will not do anything with ill intent.”
In a 52-page manifesto, the BJP has backed Foreign Direct Investment to boost jobs in all sectors, except from global supermarkets. It also promises simplified taxes, low-cost housing for every family and a new national health policy.
The party says it will explore the building of a Ram temple at the site where Hindu activists razed the 16th century Babri mosque in December 1992, “within the constitutional framework.” It has also promised to repeal the Article 370 of the Constitution granting special status to Jammu and Kashmir, and draft a Uniform Civil Code for “gender equality.”The party said it would revise India’s nuclear doctrine “to make it relevant to challenges of current times.”
“The Ram temple issue is culturally important to us. This has nothing to do with Hindutva or athva (otherwise),” said senior BJP leader Murli Manohar Joshi, asserting that Hindutva was not an election agenda.
The party has been fending off speculation that the document’s release was delayed because of a tussle between the old guard backed by a section of the Rashtriya Swayamsevak Sangh, the BJP’s ideological mentor, and the new genre of leaders who are pushing for a BJP that addresses modern aspirations.Congress leader Digvijaya Singh said, “They use Ram for political gains. They use religion in politics.”Opinion polls say the BJP will win the national election that began today, but may fall just short of a majority.
In a manifesto that promises economic revival, the BJP also says it will link welfare schemes like the Congress-led government’s rural jobs scheme to assets creation. The party promises focus on infrastructure such as new cities, high-speed railways and broadband Internet even in villages.