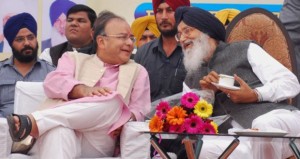 AMARITSAR: BJP and Arun Jaitley have downplayed ally Shiromani Akali Dal’s call for Jaitley as a potential Deputy Prime Minister under Narendra Modi.Speaking at a public rally in Attari Punjab Chief Minister Parkash Singh Badal said that Jaitley was a front-runner for the post of Deputy Prime Minister or Finance Minister, and urged the people of Amritsar to vote him to power.
But Jaitley called the statement Badal’s personal opinion. “I can assure that I am not looking for any position. These are comments made in the course of a campaign. What probably he must have in mind that Punjab need good voice to represent at the Center,” said the BJP leader who is contesting the Lok Sabha elections from Amritsar in Punjab.
Another BJP leader Mukhtar Abbas Naqvi said the party has not taken any decision. “Parkash Singh Badal is a very senior leader. This is his wish, but no decision has been taken as yet,” said. Badal had introduced Jaitley as a future Deputy Prime Minister to people of the border district of Attari during the BJP leader’s first public rally in the region. “If voted to power, he will be deputy prime minister or finance minister,” Badal said.
While the prophecy appeared to be meant to boost Jaitley’s profile in his first Lok Sabha election in which he faces off with former Punjab CM, Congress’ Amarinder Singh, the generous introduction can cause many of Jaitley’s colleagues to go green with envy.
The well-known lawyer, who handled important portfolios – law, commerce and disinvestmenet – in the Atal Bihari Vajpayee’s government, is sure to get a plum assignment should Narendra Modi lead BJP to power in May. But the sheer idea of his becoming number 2 to Modi can cause heartburn to many senior leaders in the party. LK Advani had to wait for long before Atal Bihari Vajpayee made him the deputy PM in 2003.