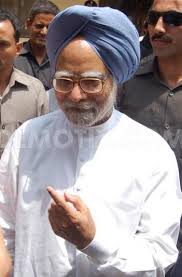 NEW DELHI : Brisk voting has been reported in Kerala, one of the 11 states and three union territories, where polling for the general elections is being held today. 91 of the 543 Lok Sabha constituencies vote today –  all seven seats in Delhi, 10 in Uttar Pradesh, six in Bihar, 10 each in Haryana, Odisha and Maharashtra, all 20 in Kerala, four in Jharkhand, nine in Madhya Pradesh and one seat each in Chhattisgarh and in Chandigarh, the Andaman and Nicobar Islands, Lakshwadeep and Jammu and Kashmir. Odisha is also voting for a new state assembly today.
In Bihar, two paramilitary jawans were killed and four others injured in a landmine blast between Jamui, where voting is being held, and Munger.Today’s contest features several top leaders including seven union ministers, among them Kamal Nath, Kapil Sibal and Ajit Singh; then there is former BJP president Nitin Gadkari, retired Army chief General VK Singh and Lok Sabha speaker Meira Kumar.
Arvind Kejriwal’s Aam Aadmi Party or AAP, which is debuting in the national polls, also has prominent leaders in today’s battle – Yogendra Yadav, Ashutosh and Shazia Ilmi.
In Delhi, over 1.2 crore voters will cast their ballots to decide between three main political parties – the BJP, the Congress and the Aam Aadmi Party – in seven Lok Sabha constituencies. The day-long polling that began at 7 a.m. will go on till 6 p.m. for voters to choose among 150 candidates in Delhi, including 57 independents.
The Congress, which lost control of Delhi after the assembly polls in December, is trying its best to lure voters, while a confident BJP and the vocal AAP that ruled Delhi for 49 days are being seen as the favourites by political pundits.
While both the BJP and AAP have claimed they will win all seven seats in Delhi, the Congress, whose 15-year rule in Delhi ended in December, said voters who had ignored the party in December have returned.Chhattisgarh’s Bastar Lok Sabha constituency, one of the worst insurgency-hit regions votes today too.