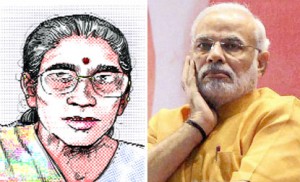 NEW DELHI : Narendra Modi, the BJP’s prime ministerial candidate, has written the name “Jashodaben” in the column for spouse in an affidavit that he filed as the BJP’s candidate for the general election from Vadodara in Gujarat yesterday.
This is the first time that the 63-year-old Gujarat chief minister has declared that he is married. He has, however, said in the affidavit that he has no information about his wife’s assets, pan number et al. In earlier elections Mr Modi had left the field for spouse blank. The rival Congress had raised questions about his marital status after he filed his nomination papers for the 2012 state elections in Gujarat.
Congress general secretary Digvijaya Singh tweeted this morning, “Modi accepts his Marital Status.Can Women of this Country trust a Man who stalks a woman, deprives his wife of her right? Vote against Modi (sic).” Mr Modi has never commented on reports that he wed Jashodaben, a retired school teacher, when he was 17.
The 62-year-old Jashodaben recently told a newspaper that they split three years into their marriage and since he left “we have never been in touch”. Mr Modi allegedly kept the wedding secret because it meant he would not be able to climb the ladder of the puritan Rashtriya Swayamsewak Sangh (RSS), the BJP’s ideological mentor and a group that frowns on key workers marrying, according to a recent Modi biography by author Nilanjan Mukhopadhyay.
In 2009, a magazine tracked Jashodaben to the school where she taught but she refused to give an interview, saying she was afraid of her “powerful” husband. In the recent newspaper interview she said, “I know he will become PM (prime minister) one day.” Opinion surveys predict the BJP will get the most seats in the national elections.
Jashodaben reportedly gets a monthly government teacher’s pension of Rs. 14,000 and leads a reclusive life with a brother in a village in western Gujarat. Mr Modi filed his nomination papers in Vadodara yesterday after a massive road show. He is also contesting from Varanasi in Uttar Pradesh.