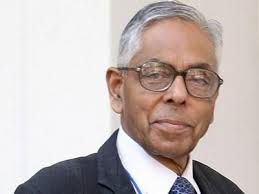 KOLKATA: Minority Congress-led UPA II appointed West Bengal Governor M K Narayanan this evening has sent in his papers to quit his office, Raj Bhawan sources said.After CBI questioning him at Raj Bhawan recently, it was widely believed that Narayanan would put in his papers either on 2nd or 3rd July but political sources said: “He decided to quit and send in his papers to Union Home Ministry quitting his office as he apprehended a few more rounds of CBI questioning in regard to his role in Augusto Chopper deal when he was national security advisor under UPA II regime.’’
Official sources though tight-lipped, but confirmed that “State Chief Secretary S Mitra invited him to a dinner this evening’’ which displays a bit of discontent in Mamata Banerjee-led Bengal Government on BJP-led NDA Government’s decision to force him out of office seven months before his term ended.
Till filing this report, Chief Minister Mamata Banerjee is not known to have reacted yet, though she flayed fuel price hike by Centre but a senior TMC leader said: “Then the BJP is following a traditionally Congress prescribed formula to clear off the offices for induction of their own men.’’
Incidentally, while no Governor whoever were asked to quit and quit, barring Narayanan were grilled by agency like CBI (as they enjoyed a constitutional immunity from such eventuality), sources said even during UPA II regime the agency wanted question him on same issue, but Centre didn’t permit.Sources said Narayanan, who with his wife would leave the massive colonial building on 4th July, would be given a farewell on 3rd by his office staff or may be by TMC Government, may go back to his home.
Observers here believe Narayanan who despite being a Congress appointee somehow maintained a good working relation with Bengal Government notwithstanding his loud-thinking at times about the poor state of higher education in the state or on post-poll violence which embarrassed Chief Minister on occasions.
Though nobody would guess a name eventually would be replacing him and in BJP list of names, political observers here believe that a few state BJP leaders have already been informed about the candidate.