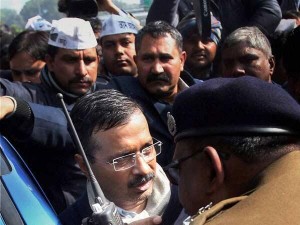 MUMBAI : Arvind Kejriwal, the chief of the Aam Aadmi Party (AAP) will begin his campaign in Maharashtra with public transport commutes that are likely to deliver an array of photo-ops.After landing at the airport, the 45-year-old will catch an auto-rickshaw to go to Andheri station, his party said today. There, the former Delhi chief minister will take a local train to Churchgate and interact with commuters on board during the 40-minute ride.
Later in the day, he’s expected to drive to different parts of the city in support of his party’s candidates. He will use the Eastern Freeway to reach the Mumbai North-East constituency where social activist Medha Patkar is the AAP candidate.In 2012, Congress president Rahul Gandhi made a surprise decision during a trip to Mumbai to use one of the city’s famous local trains, winning media attention and  marks for his attempt at immersive politics.
Mr Gandhi, 43, is heading his party’s campaign for the national election. Opinion polls favour the BJP, which has declared Narendra Modi as its candidate for prime minister. Though the party is expected to win the most seats, it is likely to fall short of a majority.
Mr Kejriwal’s party, just over a year old, is being seen as a major disruptor.  Though opinion polls show it may not win many seats in the national election, it’s perceived as setting the agenda on issues like corruption.