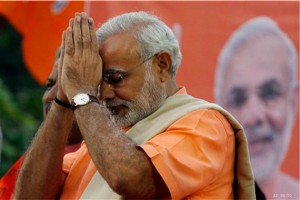 NEW DELHI :  At a key election meeting of the BJP in New Delhi today, party president Rajnath Singh faced some tough questions from senior leaders Sushma Swaraj and Murli Manohar Joshi over reports of the party’s prime ministerial candidate Narendra Modi contesting from Uttar Pradesh, say sources.Mr Joshi, who is the sitting MP from Varanasi, raised media reports on Mr Modi contesting from Varanasi, sources said. “Why is there no clarification on Mr Modi contesting from Varanasi if the reports are incorrect,” Mr Joshi, reportedly said. Dr Joshi is one of the senior BJP leaders who was opposed to Mr Modi being projected as the party’s presumptive PM.
Varanasi is not only considered a safe seat as a BJP stronghold, party workers also feel that if Mr Modi contests from here it will galvanise the entire UP region – called Purvanchal – to return to the BJP. In 1998, the BJP bagged 24 of the 32 Lok Sabha seats from this region. In 2009, it was down to just four, with the Samajwadi Party and BSP gaining at its cost.
There is also the symbolism of the BJP’s prime ministerial candidate and the man long seen as a “Hindutva mascot” contesting from one of the three temple towns in UP important to the Rashtriya Swayamsevak Sangh. The other two are Ayodhya and Mathura.At the meet, Ms Swaraj also raised the issue of tainted leaders’ entry in the party and asked Mr Singh “Who is clearing alliances with dodgy leaders?”