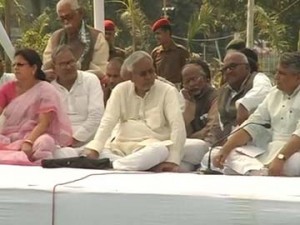 PATNA : Bihar Chief Minister Nitish Kumar is sitting on a five-hour-long dharna at Patna’s Gandhi Maidan demanding special status for the state.The Centre’s announcement to grant special status to Seemandhra – the region of Andhra Pradesh that will form the residuary state once Telangana is carved out – prompted Mr Kumar to call for a dawn-to-dusk bandh.
Earlier in the day, he led a protest march from his residence to the Gandhi Maidan – a distance of 6 km – where he accused the Congress-led government in Centre of neglecting Bihar.”We have been demanding this for a long time. But instead of acting on it, the proposal has been put in cold storage. Seemandhra was given a special status within 24 hours without any demand, and there has been a deal between Congress and BJP on for it. But why only Seemandhra? When it comes to Bihar, the demand is put in cold storage. So, we’ve organised this non-violent protest,” the Chief Minister told NDTV.
He has also made a unique appeal to the people of Bihar by asking them to come out of their houses and clap on utensils for five minutes on the day of the bandh.Mr Kumar said beating of utensils was aimed at sending a voice of protest to the central government.He said the special status was essential for the development of an economically backward state like Bihar.
After the call given by the Chief Minister, hundreds of ruling Janata Dal (United) workers disrupted train services and blocked roads at many places in Bihar today to enforce the shutdown.According to the police, JD(U) supporters halted over half a dozen long-distance trains, and as a result, passengers were stranded at Patna, Gaya, Jehanabad, Bhagalpur, Nalanda and Darbhanga railway stations.
Buses, trucks and other vehicles kept off the roads.After today’s bandh, Mr Kumar will undertake a statewide tour starting March 5, as he prepares to make the special category status demand a big part of his Lok Sabha poll campaign.