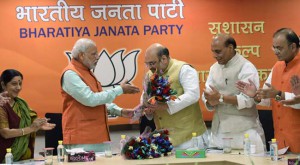 NEW DELHI : The BJP’s top leaders -including Prime Minister Narendra Modi – met this evening in Delhi to review the huge gains of the party in two major states. The BJP has won Haryana, and has the most seats in Maharashtra, but is short of a majority. In Maharashtra, the BJP is set to win 123 of 288 seats. It needs another 23 to form the government.
Meanwhile , Sharad Pawar’s NCP has offered external support; the BJP will review this option against a reconciliation with former ally Shiv Sena.  BJP president Amit Shah and Sena chief Uddhav Thackeray spoke this evening, said sources; the call could be a crucial ice-breaker.
Earlier this evening, Mr Thackeray said he could not comment on a possible reconciliation with the BJP, because nobody had contacted him. Sources in the Sena say that the party is willing to accept the post of Deputy Chief Minister for Maharashtra, and is open to talks about other key portfolios.
The alliance ended after 25 years in September because the BJP was unwilling to remain the Sena’s junior partner in Maharashtra.  The BJP credited today’s successes to the Prime Minister, who campaigned extensively for the election. “Today’s results show that the Modi wave is still the tsunami that can destroy,”  said BJP president Amit Shah.
The results will also boost the govenrment’s confidence in clearing more economic reforms. Just yesterday, it lifted controls on diesel prices.State elections determine seat shares in the Rajya Sabha or upper house of parliament, where the BJP and its allies lack a majority. Gains in state elections  will make the government less dependent on support from the opposition  to get legislation cleared.
Haryana and Maharashtra  have been bastions of the Congress and the party’s decimation in both states continues the massive decline it marked in May when it accrued its worst-ever result in the national election.