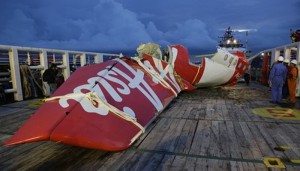 JAKARTA: Sixteen days after AirAsia flight QZ8501 went down into Java Sea, Indonesian Navy divers have successfully retrieved one of the black boxes of the crashed plane, while efforts are on to extricate the other one – the cockpit voice recorder – still stuck in the plane debris.
The second black box, has been located too, however it is yet to be pulled out to the surface, reported Reuters quoting a top official.The retrieval of the plane’s flight data recorder comes as a major breakthrough for the multinational search team that often weathered rough seas and zero visibility, as the orange coloured black box is said to hold vital clues about the plane’s crash.
After being detected near the area from where pings were heard on Sunday, the flight data recorder was retrieved in the early hours of Monday morning, confirmed Henry Bambang Soelistyo, chief of Indonesia’s search and rescue agency.  However, the divers are yet to take out the cockpit voice recorder.
” The National Transport Safety Committee chief has informed me that at 7.11 am, we succeeded in bringing up part of the black box that we call the flight data recorder,” Bambang Soelistyo told reporters.
The black boxes were detected at a depth of 30-32 metres on Sunday but they were said to be entangled amid the parts of plane wreckage. The work to retrieve the black boxes started today, that is, on the sixteenth day of search.
A top official from Indonesian Directorate of Transport Ministry, Tonny Budiono confirmed that the black boxes had been found.”The navy divers in Jadayat state boat have succeeded in finding a very important instrument, the black box of AirAsia QZ8501,” said Tonny Budiono.
Indonesia Navy Chief Abdul Aziz Jafar tweeted that the efforts were on for raising the Black Box, sandwiched in between the fragments of plane debris.
The search for black boxes gained momentum, after the divers picked intense pings from its beacons yesterday. Earlier, the search team had very strenuously lifted the plane’s tail using balloon method, but were disappointed to not find the black boxes.
The data recorders were later found to be stuck amid the wreckage of the plain’s main body, the fuselage that was found on Saturday. A top official has said that if another black box cant be retrieved, they will similarly lift the plane’s main body using giant balloons and a crane.
Out of 162 victims, only 48 bodies have been recovered, at least two of them still strapped to seat belts.On Sunday, the Disaster Victim Identification (DVI) team of Indonesia (DVI POLRI) said they had identified three more remains, 1 Indonesian known as Vera Chandra Kho (female) and 2 South Koreans, identified as Kyung Hwa Lee (female) and Seongbeom Park (male).
The ill-fated Flight 8501 that went off radars just after 42 minutes of taking off, was flying to Singapore from Surabaya with 162 passengers.
Of 162 people on board the plane, there were 137 adult passengers, 17 children and one infant, along with two pilots and five crew. Majority of them were Indonesians.The plane’s pilot, Captain Iriyanto, had made a request to climb to 38,000 ft to avoid stormy clouds, however the permission was not granted as there was another plane in that route.