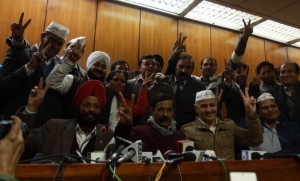 New Delhi : Days after forming a minority government and winning the trust vote in the Delhi Assembly, a buoyant Aam Aadmi Party (AAP) has begun planning its debut in the Lok Sabha elections, with leaders saying Saturday that the party would contest at least 300 seats in the polls due this summer.
The first list of AAP’s Lok Sabha candidates will be announced within the next two weeks and party leaders said a prime ministerial candidatewould be named only after the poll results.
Members of the AAP national executive – the highest decision-making body of the party – met at Delhi’s Constitution Club for the first time to review what the party had done right in Delhi, and what they needed to do to replicate that success across the nation.The national executive will meet again Sunday.
“We understand that after the formation of the Delhi government, there is hope in people across the country. People thought there was no alternative to corrupt politics. Today they have hope in an alternative,” said AAP leader Prashant Bhushan.
While his colleague Yogendra Yadav said he would like to see Delhi Chief Minister Arvind Kejriwal as the prime minister, he added that it was important for the party to assess its current strength. However, Kejriwal clarified later that he would not contest the Lok Sabha elections.
Bhushan said AAP wasn’t unduly worried about the seemingly bipolar fight for power at the centre between the BJP’s Narendra Modi and the Congress’s Rahul Gandhi.AAP sources said the party aims to contest in several states and that while it might be able to ride the wave of its Delhi success in urban centres, it realises fighting elections in rural areas will be a different ball game altogether.
“In different parts of the country, there are different factors that lead to electoral wins. Caste, religion, money are all big factors. What we want to offer them is a cleaner alternative. But getting the word across is the first challenge,” said a senior leader.
Sources said that AAP is planning to contest all seats in Gujarat and Haryana and also strongly focus on urban pockets in Maharashtra, Karnataka, West Bengal and Tamil Nadu. The party is also looking closely at Uttar Pradesh and Rajasthan where it would need a different approach due to factors such as caste and community.They also said the party would focus on finding “active members”, as opposed to “general members”, which will be the barometer to judge the organisational strength of the party in an area.
“Since December 25, there has been a membership drive throughout the country. In the application form, we ask each candidate if they are willing to give time to the party. If the answer is yes, then the person becomes an active member. We will look at these numbers when deciding if the party should contest a seat. However, it must be said that after the events of Delhi, there is a huge upswing in support from all parts of the country,” a leader said.
AAP, sources said, is looking to open a local office in each ward and get at least 10 active members per village
National executive member Sanjay Singh said that in the next month, AAP would seek forms from those willing to contest.
“The procedure of selection will be similar to that of Delhi Assembly elections. there will be a screening of candidates but the Political Affairs Committee (PAC) will take the final call,” he said. Sources said there would be a “four-tier” selection process for candidates, who apply for a ticket for the Lok Sabha polls. “The candidate will have to go through, the district committee, the state committee and the national committee which will be the PAC. We will conduct deep background checks on each candidate, which will be conducted by associated organisations and NGOs,” a party leader said. AAP is also hopeful of involving social organisations and NGOs in preparing for the LS polls.
“Several of our members, who were involved in social service in the past, will tap into their networks to expand grassroots membership and active volunteers. Unlike in Delhi where we had the Jan Lokpal movement platform to build on, we will have to use the experience of social workers and like-minded groups to further our cause,” a party leader said.Indian Express.