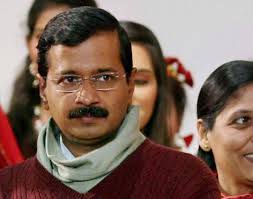 NEW DELHI: The Aam Aadmi Party has claimed that Prime Minister Narendra Modi’s “personal attack” on Arvind Kejriwal at Ramlila Maidan on Saturday has drawn more donors towards them.
AAP national secretary Pankaj Gupta said the average number of donors accepting the #IfundHonestParty challenge, its latest fund collection initiative, went up two fold on Saturday when the rally was held.
Addressing the crowd at the rally, Mr. Modi had advised the former Delhi Chief Minister to join the Naxals as he calls himself an anarchist.According to Mr. Gupta, more donors started contributed in the later half of the day when the remarks had started appearing on the social media.
“On an average, 300 donors accept the #IfundHonestParty challenge in a single day. But on Saturday the number swelled to 600 in Bangalore,” said Mr. Gupta.However, the numbers are not synchronous with the statement issued by the party, which says that 4,500 donors (i.e. an average of 500 donors in a day) have participated in the #IFundHonestParty Challenge in the nine days from January 2 to January 10.
The challenge was launched by Mr. Kejriwal on January 2. It is based on a chain reaction principle where each person accepting the challenge has to nominate 10 others.The overall amount gathered so far, said the party, was Rs.2 crore, which means a little over Rs.20 lakh each day.
Asked if there was a direct correlation between the increased number of donors and the amount gathered, Mr. Gupta said the overall cash amount received under the #IFundHonestParty challenge on January 10 was Rs.12 lakh.
“The amount donated through cheques could be tabulated once those are cleared. But the jump in the number of donors is an encouraging sign. We are not just generating money but also support, which signifies reach in the political process,” said Mr. Gupta.