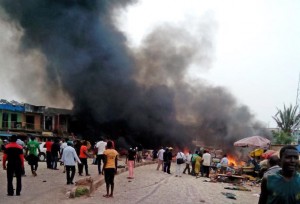 JOS (Nigeria) Two car bombs exploded at a bustling bus terminal and market in Nigeria’s central city of Jos on Tuesday, killing at least 118 people, wounding dozens and leaving streets strewn with bloodied bodies.
There was no immediate claim of responsibility for the twin car bombs. But they bore the hallmarks of Boko Haram, the Islamic extremist group that abducted nearly 300 schoolgirls last month and has repeatedly targeted bus stations and other locations where large numbers of people gather in its campaign to impose Islamic law on Nigeria.
The second blast came half an hour after the first, killing some of the rescue workers who had rushed to the scene, which was obscured by billows of black smoke.