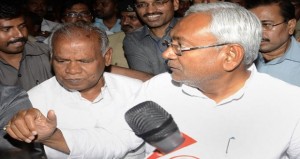 PATNA: Mahadalit leader Jitan Ram Manjhi was on Tuesday sworn in as new Chief Minister of Bihar following incumbent Nitish Kumar’s decision to step down in the wake of the JD(U)rout in the Lok Sabha polls.
Bihar Governor J Y Patil administered the oath of office to Manjhi and 17 ministers at a simple function held at the Raj Bhavan here. And all the ministers were assigned the same portfolios they had in the erstwhile Nitish  Government, while 16 departments would remain with the Chief Minister. Most of these departments were handled by the BJP Ministers, when the party was in alliance with the JD(U)in the state. Two Independent MLAs, who had offered their support to the JD(U)Government,  also  found a place in the new Cabinet.
Manjhi, who was born to a landless peasant, belongs to extremely backward Mushhar community, also called rat catchers. And he  is the third Dalit to become the state’s Chief Minister after Bhola Paswan Shastri and Ram Sundar Das.
Meanwhile, the move to elevate Manjhi is seen as yet another instance of Nitish’s political astuteness since it will at once enable him to quell dissidence in the JD(U) ranks and woo the Mahadalits,who are part of his social engineering.Political circles,though, believe that the JD(U)leader has taken a leaf out of RJD chief Lalu Prasad’s social empowerment model, which saw Lalu’s wife Rabiri Devi being made the Bihar CM in 1997.
Meanwhile, the state BJP flayed the move to elevate Manjhi as CM saying that he had never before handled a key department and that the actual intention was to remote control the new dispensation. “Manjhi never handled any key department as a minister and would be a highly pliable CM. He would be remote controlled by Nitish,” said senior BJP leader, Binod Narayan Jha.