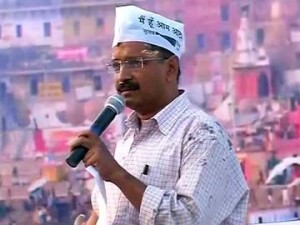 VARANASI: Arvind Kejriwal told a capacity crowd at a rally in Varanasi today that he will take on the BJP’s Narendra Modi in the general elections in this temple town of Uttar Pradesh.The Aam Aadmi Party chief built a case for his candidacy by ripping into Mr Modi’s claims of development in Gujarat, the state he governs, and then said, “I will contest these elections against Modi from Varanasi.”
He invited the BJP leader for an open debate alleging, “He doesn’t speak to anyone, comes by helicopters, holds a rally and leaves by helicopter. He has to come here and talk to the people of this country… and if Modi doesn’t come then you should realise that he is surely hiding something.”
Mr Kejriwal had said earlier this month that he would consult the people of the city on whether he should challenge the Gujarat chief minister in Varanasi, considered a BJP stronghold. At his rally today he said, “I want to ask you all, should I contest these elections against Narendra Modi? But I don’t have the power of money, I will come to you to ask for money. We will contest these elections with your money.”
He asked people to take a month’s leave and campaign for him in Varanasi and also in Amethi, the Lok Sabha constituency of Congress vice president Rahul Gandhi. Earlier in the day, he told NDTV, “Banaras and Amethi are the only two contests that matter in this election. Our priority must be to have Narendra Modi and Rahul Gandhi defeated.”
Today, as he toured the city after arriving in Varanasi by train this morning, protesters who raised slogans against him and in praise of Mr Modi, hurled an egg at Mr Kejriwal’s car; in another place someone threw black ink at him.

The BJP’s decision to have Mr Modi run for the Lok Sabha from Varanasi is designed to enthuse voters in India’s largest state to support the party. Mr Modi, who has never contested a national election, will also be contesting from a second seat – Vadodara in his home state Gujarat.

Mr Kejriwal said that like other leaders he too could have opted foor a “safe seat”. But, he said, “I have no desire to become an MP.” The AAP chief had contested his first election in December last year, earning the sobriquet of giant-killer by defeating Delhi’s chief minister Sheila Dikshit by a massive margin.

Earlier this month, he had conducted a controversial tour of Gujarat saying he wanted to audit Mr Modi’s competence in his four terms as chief minister. Unsurprisingly, Mr Kejriwal said the BJP’s claims of development in Gujarat did not check out.