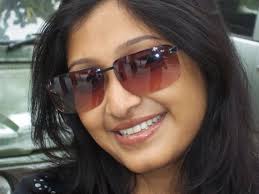 GHAZIABAD: A woman journalist working with the Rajya Sabha Television was found dead at her residence here in mysterious circumstances, police said Tuesday.  Milita Dutta Mandal (31), a producer in Rajya Sabha Television, was found in a critically injured condition in the basement of Mahagun Magic Apartments in Vaishali area Monday midnight.
A resident of flat number 809 on the eighth floor, Mandal had reached home around 11 p.m. At about 11.30 pm, residents heard a scream and found her lying in the basement, while her two-and-half-year-old baby girl was crying non-stop.

Her husband, Surya Jyoti Mandal, who works with a private company in Noida, and other residents took her to Max hospital in Delhi where doctors declared her dead.  Police have not ruled out murder.The death was discovered around 11.45pm by her husband, the police said. She was rushed to Max Hospital at Patparganj in Delhi, where doctors declared her brought dead.
The journalist, Milita Dutta Mandal, lived with husband Surya Jyoti, a two-and-a-half-year-old daughter and mother-in-law in the flat at Mahagun Mosaic. The family was at home at the time of her death, the police said.
Milita’s body was found in the basement of the building. The police said she crashed through the fibre-glass roof built over a part of the basement to allow natural light into it. “Her upper right leg and right palm had fractures from the impact,” said Urvi Singh Rathore, the Vaishali police beat in-charge. She said Ghaziabad Police was informed about the incident by Madhu Vihar police station in Delhi around 2.30am.
“We are investigating the case from all possible angles. Let the post-mortem report reach us then only we would be able to comment. Prima facie, it seems she was pushed in a fit of anger by her husband. The balcony has been found broken which might have happened by a strong push. But it is still a mystery… nothing can be said authoritatively till the investigation is complete,” SP (city) Shiv Hari Meena told agencies.
No complaint has been filed with the police. Senior police officers in Ghaziabad said a panel of three doctors is being constituted at Lal Bahadur Shastri Hospital in Delhi to conduct the autopsy. This procedure, the police said, is adopted in sensitive cases where reasons of death are not easily ascertained.
The police also said they have been unable to formally record the statements of Milita’s relatives, or even begin an investigation, as no complaint has been registered by her family. A general diary entry was, however, made at Indirapuram police station. A forensic team of Ghaziabad Police collected evidence from the spot where her body was found, including samples of blood stains.
“When the last call was made to the deceased’s home, the police were told they are sleeping. They have, however, informed that they would come over to the police station for registering the complaint on Tuesday,” said Dharmendra Yadav, SSP Ghaziabad.Milita’s relatives and friends remained tightlipped but her uncle Bappi Dutta, who lives in Chittaranjan Park, said “her death was not normal”. Vishal, Milita’s neighbour, said he got to know about her death around 7am. “They seemed a happy couple, I used to often meet them in the lift,” he said.
Milita married Surya five years ago. She worked with a national English news channel before joining Rajya Sabha TV. Surya is a senior manager with British Council Division in its office in Noida’s Sector 62.