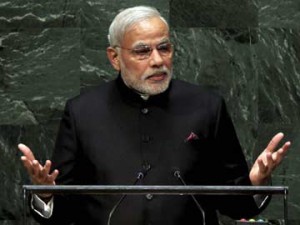 UNITED NATIONS: Rebuffing Pakistan for raising the Kashmir issue at the UN, Prime Minister Narendra Modi asserted on Saturday that he was prepared to engage in a serious bilateral dialogue with it “without the shadow of terrorism” but asked it to create an “appropriate environment” for that.
Without making a direct reference to the strident speech of his Pakistani counterpart Nawaz Sharif here yesterday in which he had insisted on a plebiscite in Kashmir, Modi made it clear that “raising issues in this forum is not the way to make progress towards resolving issues between our two countries”.
In his maiden address to the 193-member UN General Assembly, the Indian leader underlined that his government placed the highest priority on advancing friendship and cooperation with its neighbours, including Pakistan.
Speaking in Hindi, Modi said, “I am prepared to engage in a serious bilateral dialogue with Pakistan in a peaceful atmosphere, without the shadow of terrorism, to promote our friendship and cooperation.”However, Pakistan must also take its responsibility seriously to create an appropriate environment,” he told the Assembly.
The Prime Minister also said, “It is up to Pakistan to create the right atmosphere and come forward for bilateral talks.”Raising them in the United Nations was not “the way to make progress towards resolving issues between our two countries,” Mr Modi said in an apparent reference to Pakistan Prime Minister Nawaz Sharif’s mention of Kashmir and the two neighbours’ stalled dialogue in his speech at the same global forum yesterday.
“Terrorism is taking a new shape and new name. No country, big or small, in the north or the south, east or west, is free from its threat,” said Mr Modi, dwelling at length on the threat of terrorism globally.
The prime minister began his address by noting that India’s “philosophy is Vasudhaiva Kutumbakam (India sees the world as a family).””We believe in multilateralism,” the Prime Minister said no one country can dictate to the world. “We need to respond to the demands of our times,” he said.
In his 32-minute speech to the audience of almost 200 world leaders in New York, Mr Modi also talked about Yoga, sanitation and the lack of electricity and drinking water in many parts of the world. “We will turn 70 next year. We have to ask ourselves – do we wait till we turn 80? No. The next year can be an opportunity,” Mr Modi said.