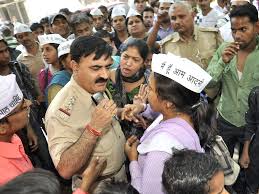 NEW DELHI : After announcing that he will lead a 10-day demonstration in Delhi, Chief Minister Arvind Kejriwal made it clear that the protest will not impede his work. Entire cartons of files will be delivered to him at the venue of his demonstration, the young chief minister said, inviting the public to join him.
Mr Kejriwal, 45, and his six cabinet ministers defied police orders this morning to  commence a sit-in against the union Home Ministry. They say they are challenging the police’s refusal to make a series of arrests last week ordered by Law Minister Somnath Bharti. They were stopped from reaching the Home Ministry office by the police, and have parked themselves on a road nearby.
Mr Kejriwal wants Delhi’s police force to come under the control of the Delhi state government instead of the central government, which runs it via the Home Ministry. They also want the cops who did not follow the Law Minister’s orders to be either suspended or fired. Home Minister Sushil Kumar Shinde has said no action will be taken till an enquiry is completed.
“The people are frustrated with an ineffective police force,” said Yogendra Yadav, a senior leader of Mr Kejriwal’s Aam Aadmi Party (AAP), justifying the demonstration.
Law Minister Somnath Bharti was accused last week of vigilantism after he went to an area of south Delhi to raid a house allegedly used for prostitution and drug dealing. Police would not follow his orders to raid the property without a warrant. Mr Bharti  has been  accused of illegally detaining four Ugandan women with his supporters, and forcing them to give urine samples for drug tests.  The AAP says the police’s inaction proves it is not apathetic about women’s safety. 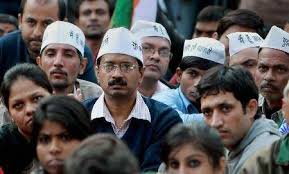