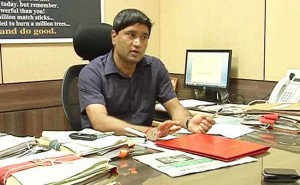 NEW DELHI: Arvind Kejriwal’s  Aam Aadmi Party (AAP) plans to appoint as Delhi’s top anti-corruption officer a man who was recently shunted out by the central government. Sanjiv Chaturvedi, who was removed as vigilance chief of AIIMS hospital, will head the Delhi anti-corruption bureau, say sources.
AAP had alleged that Mr Chaturvedi, an Indian Forest Service officer, had been victimized for exposing corruption in the central government-run hospital.
The appointment will be AAP’s first big anti-corruption move after taking charge of Delhi on Saturday. The party swept the Delhi election, winning 67 of 70 seats in the assembly and reducing the opposition BJP to three seats. The party says its first priority is to end corruption, especially bribe-taking by government officials.
“Sanjiv Chaturvedi is a very honest officer and it will be great if he joins,” said AAP leader Manish Sisodia, who is likely to be Deputy Chief Minister.
In August, the health ministry removed Sanjiv Chaturvedi as the AIIMS vigilance chief saying he was not eligible for the post and the Chief Vigilance Commission had not cleared his appointment.
Mr Chaturvedi had reportedly initiated several investigations during his two years at the premier hospital. These included cases against officials who went on unexplained, illegal foreign trips on tax payers’ money and one who allegedly had his pet dog operated upon at the AIIMS cancer centre.