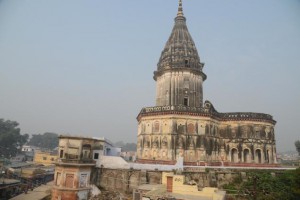 LUCKNOW: Seeking to “mobilise Hindus” and “remind them of their resolve” for construction of a Ram temple, Vishwa Hindu Parishad (VHP) is planning to organise ‘Ram Mahotsava’ for the first time on the lines of Durga Puja aross the country.
“We will celebrate Ram Mahotsava from March 21 or March 22 and it will continue till April 1. This will be for the first time that such an event is being organised by the organisation,” VHP Media in-charge Sharad Sharma said on Thursday.
This programme would be organised in every village in the country, he said.“It will give strength to Ram Janmbhoomi movement. The programme will not only be organised in villages where temples are located, but at those places also where there is no such arrangement,” Mr. Sharma told.
“During the Mahotsava, statues of Lord Ram will be worshipped for 10 days as it is done during Navratras. These statues will either be enshrined permanently or immersed,” he said.He said Hindus have already been asked to take a pledge for construction of the temple.
“But strengthen the resolve and to ensure that it is fulfilled, people will be asked to renew their pledge,” Mr. Sharma said.“We plan to reach 1.5 lakh to 2 lakh villages across the country. In Uttar Pradesh and Uttrakhand, we will make efforts to reach each and every village,” he said.
The VHP media in-charge said that the organisation has planned 600 Hindu Sammelans or conclaves across the country.“Such Sammelans will be held till March. For instance one will be held in Ayodhya on February 6, then in Prayag (Allahabad) on February 6 and Varanasi on February 8,” Mr. Sharma said.
He said these Sammelans would be addressed by senior VHP leaders including Ashok Singhal, Pravin Togadia, besides BJP MP Yogi Adityanath.
“These Sammelans are being held as part of our golden jubilee foundation year. Ram Mahotsava is related to temple construction. The objective is to celebrate Ram Navami with the same pomp and grandeur of Ganesh Mahotsava and Durga Puja,” he said.
During a Hindu Sammelan in Lucknow on January 18, International President of VHP Praveen Togadia had said the organisation would celebrate its inception only after a grand temple of Lord Ram was constructed at Ayodhya.