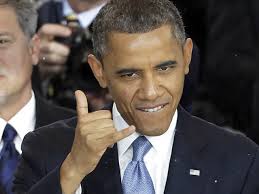 WASHINGTON: U.S. President Barack Obama is expected to seek Prime Minister Narendra Modi’s support in his effort to create a global coalition against Islamic State terror group that has gained control over large swaths of Syria and Iraq, almost equal in size of Britain. So far, more than 40 countries have joined the U.S.-led international coalition against Islamic State (IS) as it is better known across the globe.
The U.S. and its partner countries on Monday started air strikes against IS positions in Syria. However, the U.S. officials, including Mr. Obama, insist that this is not a military coalition and countries can contribute in their own way. Mr. Modi is scheduled to meet Mr. Obama at the White House on September 29 over a private dinner, and the next morning at the Oval Office for the official meeting during which the issue of IS is “definitely” expected to come up for discussion.
Officials familiar with the preparations of the Modi-Obama summit acknowledged that IS would be part of discussion between the two leaders, during which they are likely to touch upon the current situation in the Middle East. Mr. Obama, as he has been doing with other global leaders, is expected to urge Mr. Modi to join the international coalition against the IS terrorist outfit, which if left unchallenged poses a major threat to the security and stability of the region and the world. The White House, however, has refused to make any comment on the substance of discussion between Mr. Obama and Mr. Modi next week.
“As we’ve said, we believe there is a role for all countries to play. Beyond that, I’m not in position to preview the substance of the visit yet,” Caitlin Hayden, Spokesperson of the National Security Council of the White House told PTI. Mr. Obama, in New York on Tuesday, held a meeting with Arab nations which participated in the air strikes against IS.
“I just came from a meeting in which we were actually able to get Arab countries, many of which have historically been on opposite sides of issues and sectarian conflicts in the region, all united around fighting ISIL and eradicating the ideology, the extreme fanaticism that underlies what’s happening in ISIL,” Mr. Obama told a Democratic Party fund raiser. In his meeting with coalition partners, Mr. Obama said the emergence of IS has threatened lives of people.
IS militants have executed two American journalists and a British aid worker in Syria, prompting the West to join hands to combat the terror group.