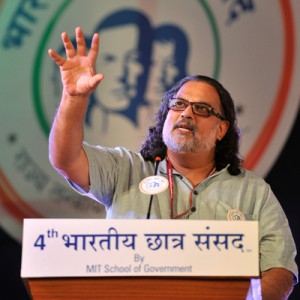 JALANDHAR:  Police on Sunday registered a case against Mahatma Gandhi’s great-grandson, Tushar Gandhi, for allegedly making offensive remark about freedom fighter Bhagat Singh.
“The case was registered against Gandhi under Section 295 (A)(deliberate and malicious acts, intended to outrage religious feelings of any class) of the IPC after a complaint by chairman of an NGO Jan Jagriti Manch, Kishan Lal,” said Bimal Kant, Inspector at Jalandhar Police Commisionerate.
It was alleged that Tushar Gandhi, while speaking to media in Jaipur earlier, had called Bhagat Singh a “guilty of British rule, due to which Mahatma Gandhi had not asked for suspension of his sentence.” Members of the Manch had submitted a memorandum to the Police Commissioner on Saturday demanding registration of a case against the Mahatma’s great-grandson.