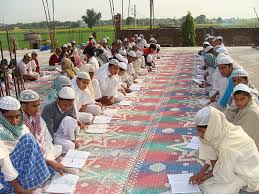 KOLKATA/DHAKA:The ruling Awami League is set to face censure from smaller parties, including liberal religious parties for “appeasing fundamentalist Jammat by allowing this pro-Pakistani outfit to operate at least its 15,000 madrasas.’’ Apparently, for Awami League and its leader and Prime Minister Begam Hassina who launched campaigns to force out pro-Pakistani and ISI-linked outfit, the censure publicly would come as a major political embarrassment. Speaking to Newstrack, a liberal Islamic party spokesperson in Bangladesh said: “These Jammat –run Qwami Madrasas are producing 45,00000 students per year, but they do not care about any professional curriculum which can ensure jobs and build their career. “Instead they spoil these students’ academic life by teaching them only religion which breed a tendency to fundamentalism and end up in creating Jammat cadres which politically and socially untenable,’’ he added. Incidentally, the BNP which had no problems with Qwami Madrasas because of its tacit understanding with Jammat, “but it wasn’t expected from Awami League which launched a political campaign against Jammat,’’ observed a political observer in Dhaka. Interestingly, what seems to have left all surprised that so far Bangladesh Government initiated no move to bring these madrasas under Government-run education system with an officially sanctioned curriculum which would stop creating mentally unfit students with proper education. “For Government knows very well Jammat madrasas are only manufacturing cadres which pose a major threat to Bangladesh polity and does not promise a proper nation building,’’ admits even Awami League leaders.