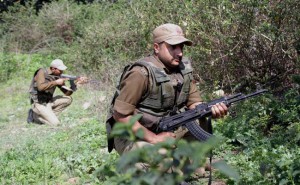 MU: In a second attack against security forces in two days, two terrorists opened fire and lobbed grenades at an Army installation in Samba near Jammu this morning. Both the terrorists were killed after a long firefight with the Army.”Two terrorists have been killed in the Samba attack,” Defence Minister Manohar Parrikar said this afternoon.
The terrorists opened fire at the camp of the 81 Armoured Regiment of the Army on the Jammu-Pathankot National Highway, a little before 6 am, but couldn’t get inside. They were then, reportedly, pinned down in the bushes between the camp and the Army school, where a long gunbattle ensued.
Reinforcements were brought in by the army and it also moved in ‘Infantry Combat Vehicles’ from Jammu towards the encounter site. A civilian, who was on his way to the Vaishno Devi pilgrimage, was injured in the attack and shifted to a nearby hospital.The Jammu-Pathankote highway, on which the Army camp is situated, was closed for traffic for precautionary measures.
Security agencies are investigating whether the two terrorists had infiltrated with the same group that carried out yesterday’s attack, which happened just 20 kilometres away.Yesterday, two terrorists dressed in Indian Army uniform had crossed the international border, hijacked a jeep and stormed a police station in Kathua district of Jammu, killing four people. It was the first major terror attack in Jammu and Kashmir since Mufti Mohammad Sayeed’s PDP-BJP coalition government took charge this month.
Both those terrorists were also killed in a fierce gun battle that lasted for six hours.
Sources said the terrorists would have used unfenced sections of the International Border to cross over. Although the entire India-Pakistan border is fenced, there are portions both on the International Border (IB) and the Line of Control (LoC) where rivers and rivulets make the fencing vulnerable.