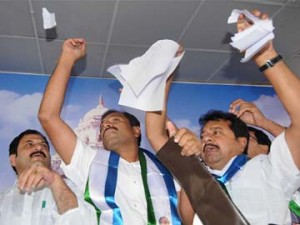 Hyderabad :Chief Minister Kiran Kumar Reddy and Leader of Opposition N Chandrababu Naidu were conspicuous by their absence when the Bill on Telangana, making the region the 29th state of India, was tabled today in the Andhra Pradesh Assembly. Legislators from Seemandhra, which comprises the other two regions of the state, however tore up and burnt copies of the Bill, and did not allow a discussion on it in the House.

Despite the show of resistance and fireworks both inside and outside the assembly, opposition to the Bill now appears weak-footed. Many even dubbed the chief minister’s own opposition to the Bill as mere bravado.
After two forced adjournments, an attempt was made to initiate discussion on the Bill inside the assembly. That is when torn copies of the Bill started raining on Deputy Speaker Bhatti Vikramarka who was in the chair at the time.

Congress minister Ponnala Lakshmaiah said both Chief Minister Reddy and Mr Naidu, who absented themselves from the House today, would find a mention in the history books. “They will remain in history for what they have done and what they are doing,” he said.

YSR Congress MLA Srikanth Reddy said they were not surprised. “We never trusted the chief minister from the beginning. It is all a part of a game… he is dancing to the tunes of the Congress High Command.”

With the formality of the Bill being tabled in the Assembly now completed, it seems like just a matter of time before it is sent back to the President, whether there is a discussion on it or not.