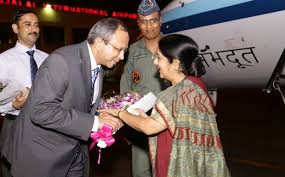 DHAKA: Sushma Swaraj arrived in Dhaka tonight on her first official visit abroad after becoming the External Affairs Minister.During her visit, she will hold talks with the top leadership on key bilateral issues including the Land Boundary Agreement, the proposed Teesta river pact and illegal immigration.
This is Ms Swaraj’s first stand-alone foreign visit after becoming the minister. She had accompanied Prime Minister Narendra Modi during his first official visit to Bhutan earlier this month.During the visit, the minister will hold discussions on bilateral issues with Ali and also call on President of Bangladesh Abdul Hamid and Prime Minister Sheikh Hasina.
Ms Swaraj arrived in Dhaka for the two-day visit accompanied by Foreign Secretary Sujatha Singh and other senior officials. Bangladesh’s Foreign Minister A H Mahmood Ali received her at the VIP lounge of the Hazrat Shahjalal International Airport.
Indian High Commissioner Pankaj Saran and Bangladesh Foreign Secretary Shahidul Haque were among others present at the airport.
Ahead of her visit, Ms Swaraj spoke to West Bengal Chief Minister Mamata Banerjee about the two-day trip. According to official sources, Ms Swaraj made a call to Banerjee to “touch-base” and tell her about the visit. Though there are no pacts to be signed and no big expectations, the trip, which is termed as a “goodwill” visit, is aimed at taking forward the bilateral ties which are on a “positive trajectory” for the past few years.
The Indian side maintains they were not going with the “shopping list” and the Minister will review the status of bilateral ties and what to expect in the coming years.However, the Indian delegation, which is expected to raise issues like illegal immigration and market access, is also prepared that Bangladesh will raise the issues of LBA and the proposed Teesta river pact.
Significantly, it was the BJP’s opposition, coupled with that of the Trinamool Congress and the Asom Gana Parishad, which prevented the previous Congress from formalising the land boundary agreement and signing the Teesta water sharing deal with Bangladesh.
The LBA, which is yet to be approved by Parliament, is aimed at redrawing the international boundary between India and Bangladesh by exchanging areas of adverse possession and enclaves along with population on either side, thus making the highly incongruous and porous Indo-Bangla border more manageable.