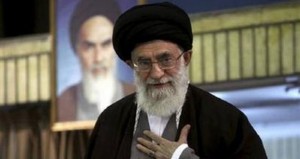 DUBAI: Iranian supreme leader Ayatollah Ali Khamenei expressed strong opposition today to intervention in Iraq by the United States or anyone else, saying Iraqis themselves could bring an end to violence there, the official IRNA news agency reported.
Khamenei, who has the last word on all matters of state, added in remarks to judiciary officials that Washington aimed to keep Iraq under its control and place its own stooges in power.The conflict there was not sectarian, but was really between those who wanted Iraq in the US camp and those who sought Iraq’s independence, IRNA reported.
“We are strongly opposed to US and other (countries’) intervention in Iraq,” IRNA quoted Khamenei as saying. ”We don’t approve of it, as we believe the Iraqi government, nation and religious authorities are capable of ending the sedition. And God willing, they will do so.”